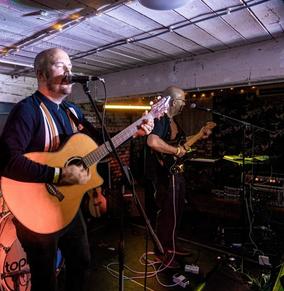 Unlike the Gallagher brothers, Craig and Alex Priddice are two brothers who can sing, play guitar, write songs and get along! There’s no nonsense, just a pure love for music. Craig and Al grew up in the Somerset countryside during the 90’s when Britpop was thriving and the likes of Oasis, Blur, The Verve and Supergrass still inspire their own compositions to this day. Craig started performing solo in pubs around 1999 accompanied by his mum and dad as roadies and Alex got the idea to follow suit and gig around the London circuit whilst he was at university during the mid-noughties.

In 2010, Craig and Alex joined forces to create, you guessed it… Craig & Alex Priddice. They became an instant hit around the westcountry live music circuit. Playing at prestigious venues and festivals across the south west such as Glastonbury Festival, Godney Gathering, The Fleece, Ashton Gate, Thekla and Louisiana in Bristol. They have even supported the likes of Toploader, Oas-is, Beans On Toast, Nick Parker, Gaz Brookfield and also auditioned in front of Michael Eavis. In 2018, they recorded their debut EP at Orchard Studios called “Stones” which is an ode to their upbringing around the Somerset levels. Alex and Craig were so excited in 2019 when they got the opportunity to record their second EP “All Will Be Revealed” at the mighty Abbey Road Studios in London. They were fortunate to be involved in recording under the guise of “Priddice Brothers Band” with talented producers such as Alex Constanza and gifted musicians such as his brother Ash, who performed his bass lines on the record along with Ed & Rob Antonello on drums and guitar respectively.

The brothers continue to enjoy performing live music and writing and recording their own tunes. Plans include to record more of their original material and look to play at many more great venues across the south and hopefully nationwide.

“One of the freshest sounds on the acoustic circuit” (Nick Parker)

“Voted one of the best local acts!" (BASIS MAG)